Enormous potential for the future: thirty years of Vienna Agreement 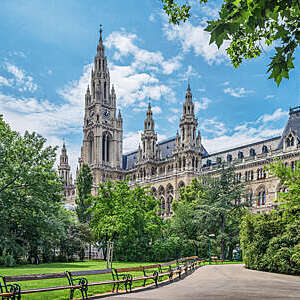 Thirty years ago, the global economy was placed on a new footing in Vienna: The Vienna Agreement set the course for even closer cooperation and collaboration. What has changed since then? Fewer barriers to trade, more harmonized rules and more room for innovation. Under the heading “From global to local: Joining forces to help global standards create local impact”, the leaders of international standardization organizations such as CEN and ISO met again in Vienna on 11 October to further advance international cooperation.

The Vienna Agreement was signed in Vienna 30 years ago. Its objective: ensuring that European and International Standards are not in conflict with each other but rather are as consistent with each other as possible. The motto: “One standard, one test – accepted everywhere”. Much has happened since then. Thanks to the Agreement, enterprises can rely on globally harmonized approaches to improving the quality of products and processes – there are uniform rules for measuring, testing and quantification of greenhouse gas emissions – parents can be confident that the packaging of drugs is child-resistant, the users of health apps can be sure of clear security levels for data protection and machinery manufacturers can use the same standards for exporting tractors to countries all over the world.

Advantages in everyday life, for the economy and climate protection

“Since the 1980s, it has been more and more obvious: market barriers can be dismantled best by uniform standards. The call for the harmonization of European and International Standards had become louder and louder. The Vienna Agreement made sure that the standards for the European internal market would not be developed in isolation from international standardization,” says Austrian Standards’ Managing Director Elisabeth Stampfl-Blaha to describe the historic influence of the Agreement. “The Vienna Agreement that was signed in our House of Standards and Innovation at Heinestrasse in June 1991 laid the foundation for cooperation between the International Organization for Standardization (ISO) and the European Committee for Standardization (CEN) and raised the efficiency of exchanges between those major standardization organizations. This still benefits all of us today – in everyday life, in business and also with regard to global challenges such as climate protection.”

Standards: common language, common objective – one out of three European standards is identical with an ISO standard

This is also underpinned by data. Nowadays, one out of three European standards is already identical with an ISO publication. In the early 1990s, only 178 documents were jointly developed by experts of the two organizations to avoid unnecessary duplication, while this figure has risen to 5 500 by now. ISO President Eddy Njoroge says: “The figures show that the Vienna Agreement is a powerful tool that has resulted in harmonized – that is, uniform – standards across a variety of sectors ranging from agriculture to healthcare, tourism, transport and much more. It is hard to see how international ambitions, such as the United Nations Sustainable Development Goals, can be achieved without many of the standards developed under this collaborative agreement. An example is the ISO 14064 series of standards on greenhouse gas and carbon footprint measurement, which ensures everyone is speaking the same language when it comes to targets and reporting, enabling us all to work towards a common goal. More generally, International Standards, including those developed under this Agreement, provide an essential basis on which national standards should be based, as they have international-level agreement and best practice.”

Sustained impetus to the economy: from energy efficiency to artificial intelligence

More generally, standardization currently takes place by more than 90 % at the international level and, thus, has become a global activity. Accordingly, work performed in national standardization bodies, such as Austrian Standards, has changed. In many fields, Austrian experts discuss subjects in “mirror committees” and, later on, input their contributions into European or International Standards.

CEN President Vincent Laflèche adds: “The Vienna Agreement has been ensuring the same rules apply in various sectors around the world for 30 years, and it has regularly given decisive impetus to the rapidly growing European Single Market. It not only contributed to reducing red tape; it has also fuelled the dissemination of new ideas, for instance in the case of energy efficiency, through EN ISO 50001, or ensured the same level of safety in strategic sectors, such as the general principles for the safety of machinery, developed jointly by CEN and ISO and widely used in the production of machinery. With regard to digital transition, CEN and ISO have also developed together standards related to cybersecurity or the impact of artificial intelligence on machines, crucial to master future challenges and foster the safe and smooth adoption of new technologies in the machinery sector.”

The inputs provided by the panel discussion and spotlight interviews are to promote dialogue, create new synergies and point out potential difficulties as an “early warning system” for certain economic areas in time. Follow-up events are being planned. High-level representatives of ISO, CEN, CENELEC and ETSI came to Vienna to discuss previous experiences and future strategies; 140 guests from all over the world joined them online.